Speed-the-Plow is a 1988 play by David Mamet that is a satirical dissection of the American movie business. As stated in The Producer’s Perspective, ‘this is a theme Mamet would revisit in his later films Wag the Dog (1997) and State and Main (2000)’. As quoted in The Producer’s Perspective, ‘Jack Kroll of Newsweek described Speed-the-Plow as “another tone poem by our nation’s foremost master of the language of moral epilepsy.
Speed-the-Plow premiered on Broadway at the Royale Theatre in a production by the Lincoln Center Theater, opening on May 3, 1988 and closing on Dec 31, 1988 after 279 performances. The cast featured Joe Mantegna (Gould), Ron Silver (Fox) and Madonna (Karen). The play was nominated for a Tony Award for Best Play and Best Direction of a Play (Gregory Mosher). Silver won a Tony Award for Best Actor (Play). 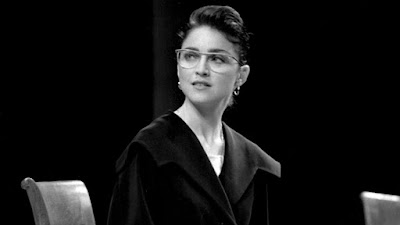 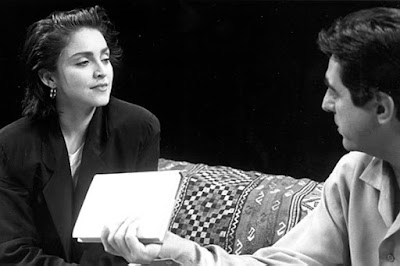 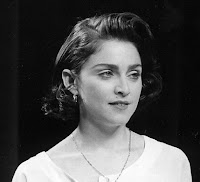 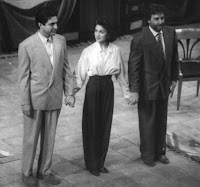 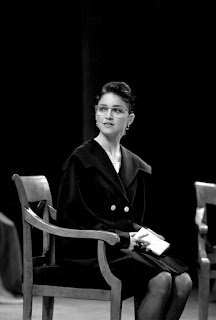 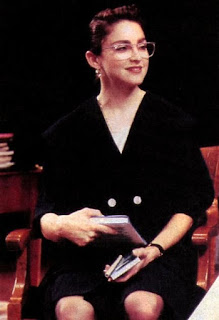 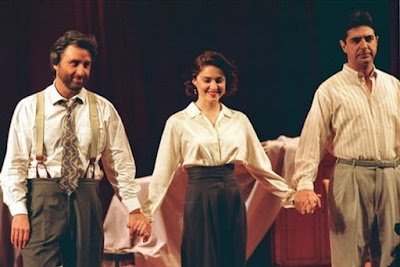 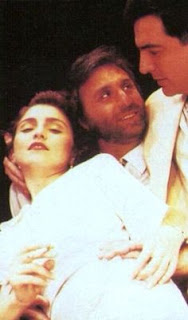 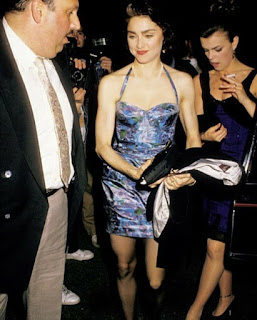 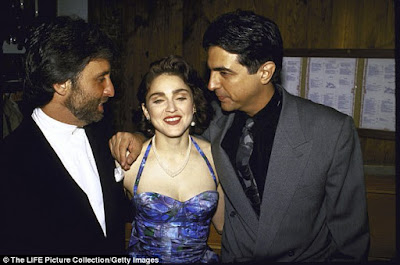 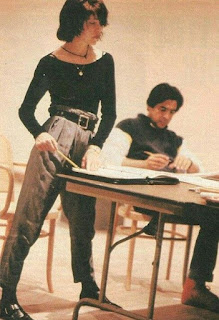 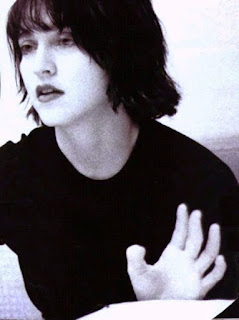 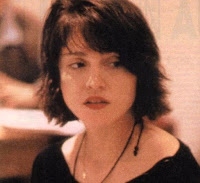 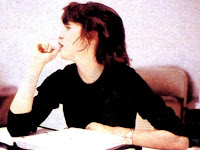 Hell hath no fury like a screenwriter scorned, and American culture is all the livelier for it. Out of the rage of embittered novelists and playwrights in studio backlots has come an enduring literature, nearly all of it practicing the same scorched-earth policy toward Hollywood that Nathanael West first apotheosized in ”The Day of the Locust.” While the theater has made many contributions of its own to the genre in the six decades since Kaufman and Hart mocked the early talking-picture industry in ”Once in a Lifetime,” David Mamet’s new play, ”Speed-the-Plow,” may be the most cynical and exciting yet.

What we have at the Royale is not merely another screenwriter’s bitchy settling of scores. Even as Mr. Mamet savages the Hollywood he calls a ”sinkhole of slime and depravity,” he pitilessly implicates the society whose own fantasies about power and money keep the dream factory in business. ”Speed-the-Plow” refuses to hold out the sentimental hope that art might someday triumph over commerce. Mr. Mamet takes the darker view that show business titans know all too well whereof they speak when they claim to make ”the stories people need to see.”

By turns hilarious and chilling -and, under Gregory Mosher’s exhilarated direction, wire-taut from start to finish – ”Speed-the-Plow” is the culmination of this playwright’s work to date. Bobby Gould (Joe Mantegna) and Charlie Fox (Ron Silver), the movie-industry sharpies at center stage, are tribal hustlers in the prize tradition of the penny-ante thieves of ”American Buffalo,” the lowlife real-estate salesmen of ”Glengarry Glen Ross” and the poker-playing conmen of Mr. Mamet’s film ”House of Games.” This time the scam is ”entertainment.” Charlie, a producer, is asking Bobby, a newly anointed head of production, to get approval for a ”package”: a big star will do a prison melodrama sure to make a zillion, provided that within 24 hours the studio gives the project the green light.

No one, of course, actually cares what this commodity is. The movie’s plot, outlined in buzz words, is a riotous morass of action- and message-picture cliches that finally must be boiled down to the single phrase needed to sell it to the studio chief: ”buddy film.” But Mr. Mamet, like his moguls, is not concerned with the substance of the movie so much as the games that attend the making of the deal. As Charlie and Bobby, long-time pals who started out in the mail room together, fantasize about how much money they can make (”The operative concept is lots and lots”), they engage in a sub rosa power struggle – a warped, Pinteresque buddy movie of their own. The supplicant Charlie literally as well as figuratively kisses Bobby’s behind to enlist his support with higherups at the other end of the phone. Though the men frequently and proudly label themselves whores, they are sentimental whores who boast of their brotherly loyalty and describe Hollywood as a ”people business” even as they stab anyone handy in the back.

If ”Speed-the-Plow” were only the story of these two men scheming to get a movie made, it would still be a worthwhile, funny evening. Exhaustively mined as the territory is, Mr. Mamet has come up with fresh Hollywood gags and newly minted Goldwy=nisms (”It’s only words unless they’re true”). His pungent, scatalogical dialogue skyrockets with the addition of such industry locutions as ”net” and ”coverage.” Yet ”Speed-the-Plow” contains a third character and a second film project – forces that collide to push Mr. Mamet’s drama and themes well beyond parochial show-biz satire.
Continue reading the main story

The catalytic character is a temporary secretary named Karen (Madonna), a naive young woman who is so unused to thinking in ”a business fashion” that she can hardly fetch coffee, let alone adopt the proper phone attitude required to secure a lunch reservation for her boss at a trendy industry restaurant. The play’s second, much-discussed potential film property is ”The Bridge, or Radiation and the Halflife of Society,” a book by an ”Eastern sissy writer” that an agent has submitted to Bobby’s boss. ”The Bridge” is the sort of artsy tome anathema to Hollywood – an allegorical tale of apocalypse rife with allusions to grace, the fear of death and the decay of Western civilization. Bobby has promised to give the book ”a courtesy read” before rejecting it, and he also wouldn’t mind taking his temporary secretary to bed. To accomplish both missions as expeditiously as possible, he gives Karen the task of preparing a reader’s report on ”The Bridge,” with the hint that the assignment might advance her career to ”the big table.”

It would be unfair to divulge anything else that happens. Mr. Mamet had developed into a more inventive storyteller than most people working in the movies, and his new play is full of the unexpected twists that have distinguished ”Glengarry Glen Ross” and ”House of Games” from much of his earlier work. In ”Speed-the-Plow,” the spiraling plot not only pays off in a violent catharsis reminiscent of ”American Buffalo,” but also gives the drama the hallucinatory mood of ”The Water Engine,” Mr. Mamet’s spectral radio play about an idealistic inventor who is silenced and destroyed by nightmarish forces of industry during the 1930’s.

As ”The Water Engine” was haunted by the recital of a mysterious chain letter, so the frequently cited preachments by the anonymous author of ”The Bridge” percolate elliptically through ”Speed-the-Plow.” The more fun is poked at ”The Bridge” and its lofty warnings about the end of the world, the more it seems that a religious vision of salvation may be presenting itself to one of the hardened moguls, prompting him to change the world and maybe even to make better movies. Or is God Himself just another exploitable concept – or con – in the greedy machinations of American commerce? Mr. Mamet certainly gives full sway to the consideration that religion might be the last refuge of whores.

Although her role is the smallest, Madonna is the axis on which the play turns – an enigma within an enigma, in the manner of the Lindsay Crouse heroine in ”House of Games.” It’s a relief to report that this rock star’s performance is safely removed from her own Hollywood persona. Madonna serves Mr. Mamet’s play much as she did the Susan Seidelman film ”Desperately Seeking Susan,” with intelligent, scrupulously disciplined comic acting. She delivers the shocking transitions essential to the action and needs only more confidence to relax a bit and fully command her speaking voice.

The men could not be better. Mr. Silver gives the performance of his career as the producer who has waited too long for his big break and will now stop at nothing to keep it from eluding his grasp. While one expects this actor to capture Charlie’s cigar-chomping vulgarity, Mr. Silver’s frightening eruptions of snarling anger and crumpled demeanor in the face of defeat make what could be another Beverly Hills caricature into a figure of pathos. Just as brilliant is Mr. Mantegna, whose reptilian head of production is a distinct creation from his past Mamet lowlifes. The actor is very funny when he demonstrates Bobby’s delight in his new decision-making authority by barking ”Decide! Decide! Decide!” into a phone. But when unforeseen circumstances suddenly force this self-assured Machiavelli to declare ”I’m lost,” Mr. Mantegna evinces just the ashen, glassy-eyed pallor needed to convey the vertigo-inducing moral void that Mr. Mamet has opened up before him and the audience.

”Speed-the-Plow,” not so incidentally, cannot be opened up by the movies. A two-set, three-person play that leaves no room for expansion, it would probably make terrible cinema. Perhaps that’s another part of Mr. Mamet’s revenge on Hollywood – to torture the studios to death with a script that is this entertaining and yet so far out of their reach. In ”Speed-the-Plow,” Mr. Mamet has created riveting theater by mastering the big picture that has nothing to do with making films. ‘SPEED-THE-PLOW’ – SPEED-THE-PLOW, by David Mamet; directed by Gregory Mosher; sets by Michael Merritt; costumes by Nan Cibula; lighting by Kevin Rigdon; production manager, Jeff Hamlin; general manager, Steven C. Callahan. Presented by Lincoln Center Theater, Mr. Mosher, director; Bernard Gersten, executive producer. At the Royal Theater, 240 West 45th Street. Bobby Gould…Joe Mantegna Charlie Fox…Ron Silver Karen…Madonna