The first one is a handwritten letter to her fans that was published in the magazine icon.
The letter, written in blue ink on Maverick stationery, discusses the MTV pajama party held to release the video for “Bedtime Story” and goes on to explain why Madonna would not be touring that year.
Sent to Marcia Del Vecchio via fax on March 21, 1995, with the note “Caresse will fedex you the original letter. 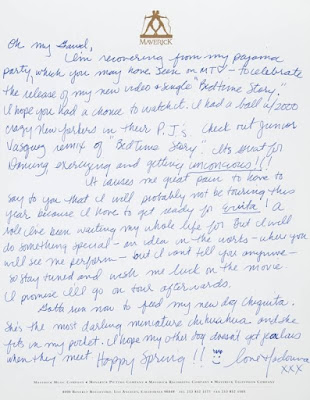 The second one was written to Madonna’s fans for icon and printed in a 1994 issue of icon . Single page, in black ink. The letter reads in part, “Hollywood Greetings from the Transient Diva. Phew! I have just recovered from the long & grueling 6 day shoot of my video for ‘Bedtime Story.’” Madonna goes on to discuss holiday shopping, bull fighting, and wishing all of her fans a happy holiday season. 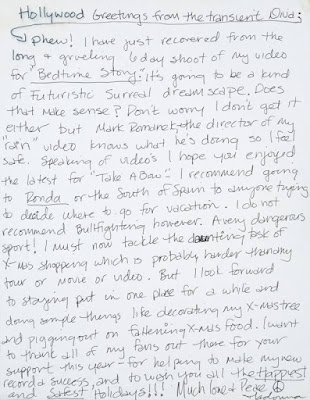 Share:
Previous Entries 1980/1981 : Fred Seidman Photoshoot "Village Voice" Next Entries Back To The Past : Madonna and Sean Penn Jogging in Malibu Before Their Wedding